The most important Monday of the year for the fashion world and the international star system has arrived once again. The 2018 edition of the MET Gala did not disappoint expectations, staging the great celebration of influence between art and fashion, thanks to the theme - Heavenly Bodies: Fashion and the Catholic Imagination - religion, in particular Catholicism, which has always been a source of great inspiration for all the most important designers.

As every year, the event was held on the night of the 1st Monday of May (May, 7th) at the Metropolitan Museum of Art in New York and had the dual purpose of celebrating the official opening of the annual fashion exhibition - Heavenly Bodies: Fashion and the Catholic Imagination - while raising funds for the activities of the Metropolitan Museum of Art's Costume Institute (over $13 million were raised last year).

The endless red carpet began at one o'clock local time and ended at half past three in the morning, before welcoming guests on a preview tour of the exhibition. The exhibition boasts the presence of memorabilia from the Vatican and the Sistine Chapel that adorn the high fashion and ready-to-wear garments belonging to collections from the early twentieth century to the present day, signed by designers such as Dolce and Gabbana, Valentino and Versace. The exhibition will open to the public on May 10th and will remain open until October 8th, 2018.

Since 1995, the event has been chaired by Vogue America's iconic editor-in-chief Anna Wintour, dressed in a pure white and sparkling Chanel garment, flanked by a group of co-hosts who this year boasted the presence of Donatella Versace, Amal Clooney and Rihanna (dressed as the Pope, dress by John Galliano for Maison Margiela).  The list of guests, top secret until the last minute, had about 500/600 guests including the most important personalities of the fashion world, as well as celebrities.

Once again this year, we have seen a parade of stars ranging from Madonna (in Jean-Paul Gauthier), Jennifer Lopez (in Balmain), Sarah Jessica Parker (in Dolce e Gabbana) e Kate Moss (in Yves Saint Laurent), wearing astonishing clothes meticulously embroidered and decorated, inspired by the sacred and liturgical vestments, religious relics and tabernacles. Madonna was the artist chosen, with good reason, given her consolidated and discussed relationship with religion and art, to perform for the lucky guests in a performance inaugurated by bells ringing, which were inevitably followed by the interpretation of Like a Prayer, while at the end of the show, the superstar opted for a reinterpretation of Hallelujah.

In addition to the iconic characters, all the emerging stars and queens of the digital scene were also there: Kim Kardashian, Kendall and Kyle Jenner, the sisters Gigi and Bella Hadid and Miley Cyrus, just to name a few. We can say that the entire star system was present.

The Designers and their muses: who dressed who?

As usual, the most important couturiers of the moment paraded on the red carpet, accompanied by their muses wearing real master pieces, unique and extravagant, made ad hoc for the occasion: Donatella Versace dressed Katy Perry, giving her real angel wings, as well as the beautiful Blake Lively, wearing a perfect baroque dress, enriched by a long purple trawl embellished with magnificent golden embroideries. 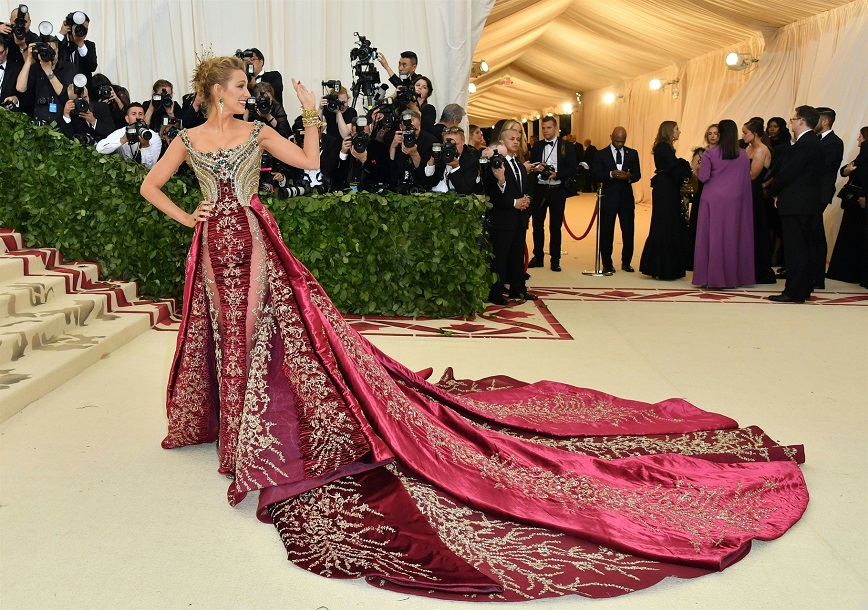 Anthony Vaccarello, art director of Yves Saint Laurent, arrived with a crowd of six “it girls”, including Princess Charlotte of Monaco.

Alessandro Michele, art director of Gucci, wearing a richly embroidered divine suit himself, was accompanied by the actor Jared Leto for whom he created a priestly stole exaggeratedly embellished with gold embroidery, cabouchon and beads; and the singer Lana del Rey for whom he created an angelic look completed by a winged halo. 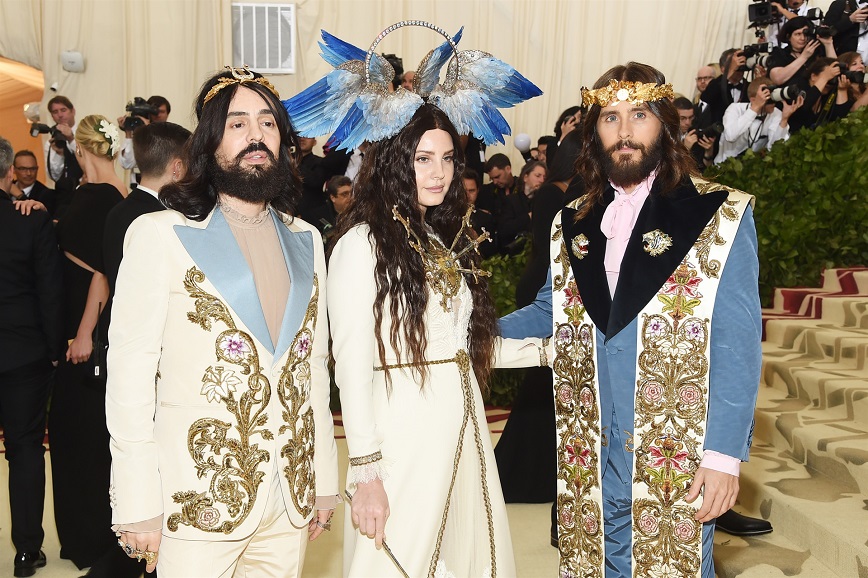 Given the theme, the predominant colours that paraded on the red carpet were white, gold, silver for those who chose to interpret the most sacred part of the theme, while red and black have distinguished those who wanted to give voice to the more secular part. A lot of space has also been given to the decorations: stones, sequins, beads, inlays of brilliant fabrics, typical sacred clothes' embroideries and crosses.

It is precisely in this scenario of extravagance, eccentricity and freedom of expression that the most acclaimed designers have been able to give their best by exploiting this particularly prolific and controversial theme to give light to their most avant-garde creations.